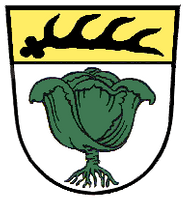 Metzingen is known for its wine-growing, which already ensured prosperity in the city at about 1600. After 1700, this was followed by the first textile businesses and tanneries that came to Metzingen. The first textile factories were built in Metzingen from 1820 on. The textile industry has remained an important mainstay of the city to this day and meanwhile has a large outlet that attracts tourists from all over the world.

With the local government reform in the 1970s, Neuhausen an der Erms was incorporated on 1 April 1971 and Glems on 1 January 1975. In 1990, Metzingen's population was 20,000. The town administration then submitted an application to be elevated to the status of a major district town. This was decided by the state government of Baden-Wuerttemberg on 1 October 1990.

First and foremost, Metzingen is known for its textile industry, viticulture and fruit growing. The Metzingen Wine Museum has existed in the Herrschaftskelter since 1979, and was renovated and redesigned in 2009. What is more, on the occasion of the 750-year-old existence of the local district, Glems has had a fruit tree museum since 2004. There, various topics revolving around pomiculture and pressing are presented. In autumn, you can even experience the fruit pressing business live.

The Festkelter (festival wine press), the Gastronomiekelter (gastronomy cellar) and the Stadthalle (town hall) are located in the town's cultural centre. The highlight is the annually-hosted, traditional wine festival.

Apart from wine lovers, nature lovers also get their money's worth. Vineyards, forests and orchards invite you to go out for a walk, hike or cycling trip.

Metzingen is also very attractive for families. There is one primary school (Sieben-Keltern-Schule), two primary and secondary schools (Neugreuthschule, Uhlandschule), one secondary school (Schönbeinschule), one grammar school (Dietrich-Bonhoeffer-Gymnasium) and one special-needs school (Seyboldschule). The Dietrich-Bonhoeffer-Gymnasium is the only one in the district of Reutlingen with a G9 model. 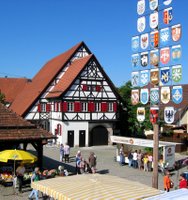 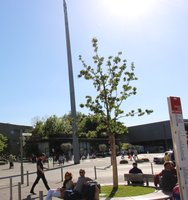 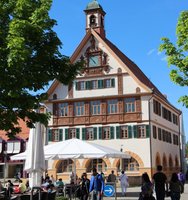